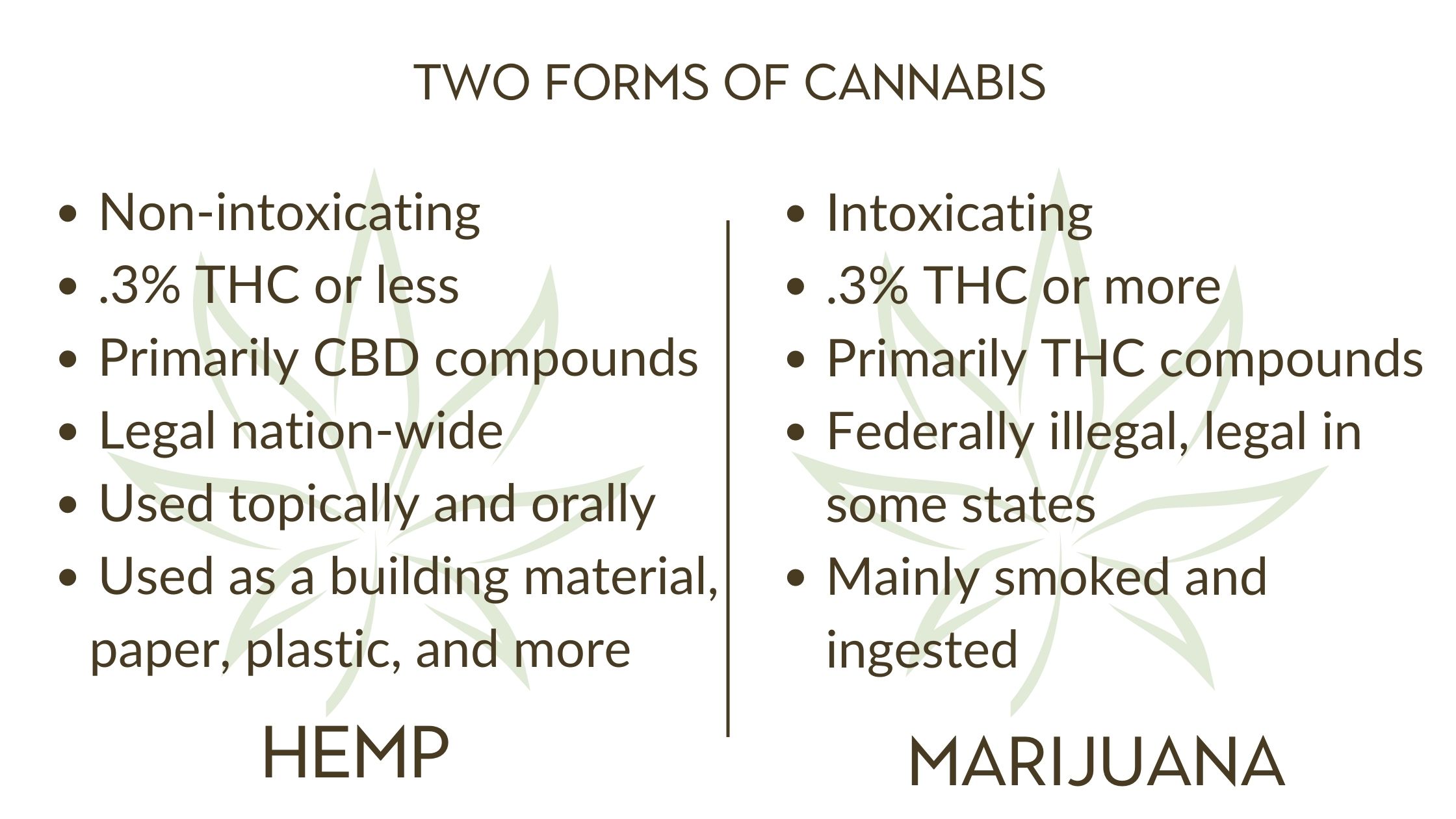 At Leanna organics, we are proud to be part of the cannabis industry.

Cannabis is a plant that comes from nature in two primary forms: Hemp and Marijuana. With the 2018 legalization of industrial hemp in the United States and the ever-growing legalization of Marijuana - both medical and recreational, the cannabis plant has never been more popular.

However, the newness of marijuana and hemp in the mainstream brings confusion. What is the difference between hemp vs marijuana? And how about CBD vs THC?

If those questions are going through your head, you are not alone, and you are also in the right place!

Unlike Marijuana, CBD is legalized on the federal level and is used more commonly.

Extracted from the leaves and buds of the hemp plant, CBD can be infused into tinctures, topicals, oils, and many other kinds of consumables. The utility of CBD is diverse, and its efficacy is backed by both science and the experience of millions of users daily.

Peer-reviewed studies show that the benefits from CBD are broad, addressing a myriad of problems such as body discomfort, anxiousness, skin irritation, restfulness, and more.

Besides the leaves and buds, which produce CBD, the fiber from hemp is a multi-purpose tool with a vast utility, such as building material, paper, clothes, plastic, textiles, and food products. It’s a healthy source of protein and fiber as well.

When considering hemp vs marijuana, the primary difference is cannabinoid levels, with CBD being the dominant compound and only trace levels of THC in hemp.

Marijuana is a form of the cannabis plant that contains primarily THC, the intoxicating cannabinoid responsible for the “high.” Unlike Hemp, it is illegal as a Schedule 1 substance on the federal level. Still, it is legalized in states like Colorado, Oregon, Arizona, Washington, California, and many other states for medical and/or recreational purposes.

Extracted from marijuana leaves and buds, THC is ingested and smoked rather than used as a topical cream or oil. Sometimes, they are infused into oils and creams; however, because THC must get into the bloodstream to be psychoactive, ingestible and smoking are most common.

The most critical thing to understand about hemp vs marijuana is that hemp primarily produces CBD vs THC with marijuana. 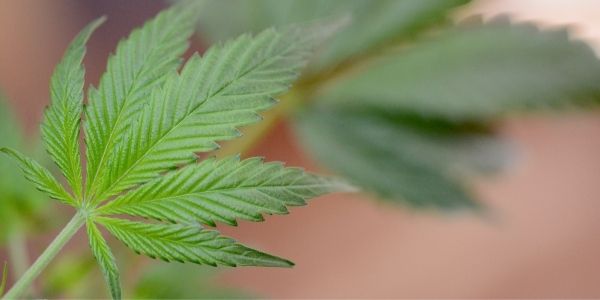 Hemp and Marijuana are different versions of the same plant

WHAT ARE THE SIMILARITIES?

Hemp and marijuana are similar in many ways; look, smell, taste, and utility.

Despite the difference between hemp being non-intoxicating, and THC being, both are used medicinally. In fact, CBD is a non-addictive and non-intoxicating alternative for many pharmaceuticals, and THC is legalized only for medical purposes in many states in the US.

An inquiry into hemp vs marijuana prompts an investigation into CBD vs THC. However, even as you look at the cannabinoid output of each plant, you will discover that CBD is present in some strains of marijuana, and trace amounts of THC are present in almost all forms of hemp.

Hemp is often mistaken for marijuana; they look the same, smell the same, and are ultimately considered one species: the cannabis plant. The similarities are vast, and the differences little.

Ultimately the legal distinction has to do with cannabinoid levels, and as most marijuana users will attest, the little cannabinoid THC has a significant effect.

WHAT ARE THE DIFFERENCES?

Marijuana and hemp are commonly misconceived as different species of cannabis, but they are two different names for the same plant. The difference is the level of concentration of CBD and THC.

THC is a psychoactive and intoxicating substance found principally in the highly regulated version of the cannabis plant, known as marijuana. On the other hand, CBD is psychoactive but not intoxicating and is the dominant compound found in industrial hemp.

The primary difference between the two plants is the percentage level of THC content. Hemp, by legal definition, contains less than 0.3%, while marijuana can have up to 35% and even higher levels of THC.

Since there’s no taxonomical difference between the two plants, the only distinguishable factor of hemp vs marijuana is whether it can get you high. 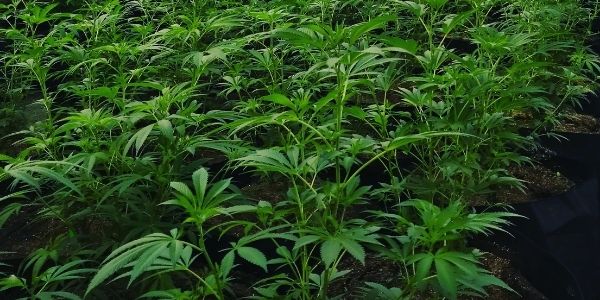 The primary difference between hemp and marijuana is THC levels

DOES CBD SHOW UP ON A DRUG TEST?

It can, however, because there only trace amounts of THC present in CBD isolate – as little as .001% and .3% in full-spectrum CBD, the chances are slim. Still, people concerned about THC drug testing should be cautious of consuming Leanna Organics’ CBD or any CBD – as there is no way to remove THC from hemp wholly.

Despite this, topical CBD such as CBD salve, CBD bath bombs, and CBD beauty products such as CBD face cream and CBD body cream does not enter the bloodstream and may be considered.

LEGAL STATUS OF HEMP AND MARIJUANA

The legal status is also a critical difference when considering hemp vs marijuana and CBD vs THC. Medical Marijuana is legal in roughly 2/3 of the states in the country, and that trend is likely to accelerate in the next few years. Recreational marijuana is legal in eleven states and Washington, D.C., and more states expect to legalize it in the future as well.

However, even within those states, many laws remain regarding when and where you can consume marijuana, drive while under the influence, cross state lines, and more.

Hemp, by contrast, is legal at the federal level, thanks to the passage of the 2018 Farm Bill. Hemp is available in any store that meets local criteria, consumed openly, ordered on the internet, and carried across state lines.

The legal status of both compounds has implications for where both products can be purchased. Even in states where it is legal, marijuana is only available at specially licensed vendors, often called dispensaries. These vendors must meet extensive background checks, regulatory requirements, and more.

Hemp, or more specifically CBD, is sold as an over-the-counter supplement. It is accessible to be used almost everywhere these days. CBD is available on the internet, while marijuana products with THC are not.

The confusion over the difference between Marijuana and Hemp is likely to remain over time. Still, the good news is that it will eventually fade as more people become aware of what each plants’ purpose serves. It will take time and further legalization and decriminalization of the plant, but very likely, people will ultimately understand that hemp and marijuana, while different in many ways, are both types of cannabis plants with varying psychoactive and bodily benefits.

DOES LEANNA ORGANICS SELL BOTH HEMP AND MARIJUANA?

No. Leanna Organics only sells products made from industrial hemp. Marijuana is a highly regulated industry where shipping across state lines and selling on the internet are not allowed.

We are proud to bring our hemp-based self-care products to Colorado and the greater US and Canada through our online store. Cannabis is a natural plant-based ally that helps millions of people daily. CBD is changing the world by offering a non-addictive and non-intoxicating alternative that is safe and effective.

If you are local to the Denver area, stop by our CBD shop in Westminster, CO. Or send us a message or call us if we can help with any questions about how to integrate CBD into your lifestyle.